This post lists 5 Biographies written with young readers as the target audience. The main characters in these non-fiction books were born in three different countries in Latin America. The images of book covers are linked to outside sources with further information. All the book descriptions give you an idea of age recommendations and the texts’ Lexile measures.

Schomburg: The Man Who Built a Library, by Carole Boston Weatherford, illustrated by Eric Velasquez

Biblioburro: a true story from Colombia, by Jeanette Winter

Growing Up Pedro, by Matt Tavares

A Library for Juana: The World of Sor Juana Inés, by Pat Mora, illustrated by Beatriz Vidal 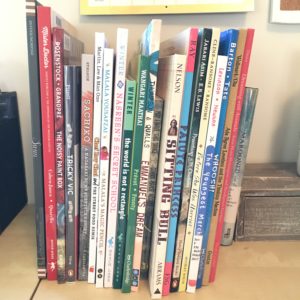 I am Priscila Costa, the author of this blog. I am a teacher of English as a second or foreign language. English Magicbox is my channel to share my teaching experience with you.

Click on the tabs to find teaching tips based on classroom tested activities, materials I have created, tools and other resources for English language teaching and learning, and much more.

Please, contact me with questions, suggestions, and requests for more posts. I will be happy to answer as soon as possible.